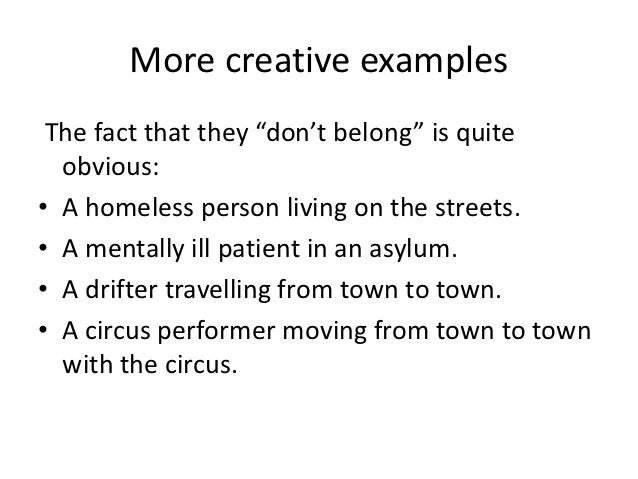 They shouldn't sit around thinking too much. Give them actions that reflect their emotion, rather than just telling responders about their emotions and thoughts. It can reveal the character's social class, education and intellect very easily. Dialogue always has two purposes: it advances the action of your story at the same time as it shows us who your characters are. Never write dialogue that isn't in the voice of the character. One of the main criteria that the HSC markers are looking for is the way in which you use language to tell your story.

Use figures of speech, such as simile, metaphor, personification, hyperbole, euphemism, onomatopoeia or pun to make more vivid descriptions of your idea. A figure of speech says a lot with few words, but must always give a clear impression of what is being described. Be subtle in your use of figures of speech.

Don't make the comparisons stand out too much and jar the responder. It should fit into the text smoothly and perhaps be drawn from one of the topics featured in the text. Don't overuse one technique, such as simile, or else your narrative will seem too simple. For example, when Mrs Toddles is lonely and isolated, the rose bushes in her front garden would be nothing but thorns and sticks, but, as she strikes up a conversation with Mrs Patel from next door, the rose buds would be appearing. When Mrs Patel comes over for a cup of tea the blooming roses will be subtly sitting in a vase on the sideboard.

Be careful not to overwrite: don't overuse adjectives or adverbs; don't use filler words or phrases such as quite, very, rather, or in as much as to make your text formal in tone, it sounds fake and forced, and wastes words. Don't use unnecessary words. Every word you write must either contribute to characterisation or advance the action meaningfully. Hook your readers from the first sentence. It is best to begin with a strong piece of action or something containing mystery.

You are often able to write with more depth and a greater sense of believability about something that you are familiar with. The problem is that most HSC students have a great deal in common and so the same storylines appear again and again in front of the markers. The point of view that you write the story from will determine the relationship your responder has with the characters and the way that they read the action. Now you are ready to begin writing your narrative.

Remember, you are being assessed on the way that you write as well as how entertaining your story is. This section of the narrative will change the situation of the character that you established in the introduction. Copyright Literatu Pty Limited. All rights reserved. Login Register. Introduction to creative writing How can you study for a story that has a stimulus topic, picture or sentence that you will not see until you open the examination paper? Purpose The first thing you need to consider is the purpose of creative writing.

Time limits Many students make the mistake of trying to do too much within the constraints of the forty minute time limit. Planning your story Think about what aspect of belonging or not belonging you want to write about, and what kind of character would best suit this idea. Brainstorm who your central character will be. Decide on a setting that reflects the emotional state of your character and the idea about belonging that you want to explore. Which narrative perspective will best suit the story that you want to tell? Create a motif that will return throughout the story to symbolise your characters sense of belonging or not belonging.

What is the conflict that your character will encounter?

Their character development should be a change in the state of their belonging. Characters — give your character a conflict The strength of your story relies on the believability and realistic nature of your main character and how well the responder is able to relate to them. Perfect people are boring!


The character must have weaknesses or faults that can be developed or overcome in response to the events that happen in the plot. Characters — develop a clear character Think about the details of who your character is. Make a list in which you consider their age, gender, socio-economic status, education, interests, physical traits, cultural background, religious beliefs, occupation, marital status, fashion sense etc.

Think of your character as being like an iceberg.

The responder reads the one-tenth of the character that is displayed in the story, but you know the nine-tenths that exist below the surface. This means that your character is believable and seems real because they will behave, think and feel in a consistent way. Don't confuse your reader with information that is not relevant to the story you are telling. Characters — structure your narrative The structure of your narrative can be tied to the development of your character.

In the orientation, the character is introduced with a fault or weakness Stage A.

'Belonging' or 'Not Belonging' creative writing ideas.. | Bored Of Studies

Stage C. Characters — create a strong narrative voice Create a believable character voice and make your character's language choice reflect the person that they are. Think about the character's age, culture, gender, education, wealth. Create unusual idioms their own sayings that are particular to them which might be repeated a couple of times in your story, which reflect this.

For example, a three dimensional character might think that they are doing the right thing, but are not necessarily doing the right thing. For instance, Esmeralda offers her four year old sister some of her chocolate bar, thinking she is generously sharing, but her sister has a nut allergy and gets very sick. Hence Esmeralda's sharing nature is actually her fault and cause of conflict in the story, but gives her character depth and believability. Setting Setting refers to the time and place in which the story is situated. The weather is very symbolic of character's mood.

The configuration of space forces characters into interesting situations. Don't introduce genres or settings that are overly complex, for example fantasy worlds that are too big to explain in such a short piece of writing. Conflict Conflict or complication is essential for your story. Use strong verbs. Make use of all of the five senses, which are heightened in times of conflict.

You can use multiple small conflicts to create a sense of crisis for your character.

Remember that you have very limited time and all conflict must be resolved. For instance, don't just say a character is angry, show us through their action, dialogue, body language, facial expressions or symbolism.

HSC Life: All Summer in a Day as a HSC Belonging Related Text

The angry character might kick the table, be red in the face, or the room he goes into might have red colours dominating it suddenly. You don't have to tell us that Mr Higginbottom is a bank manager with a university degree. You can show us this through the content of what he says and the language that he uses to say it. It's important to use dialogue throughout the narration of your story. It adds believability and life to your story. It also adds variety to the way the story is told and often highlights important points. Finally, when you write dialogue, remember that every new speaker needs to start on a new line.

Language techniques — use figures of speech One of the main criteria that the HSC markers are looking for is the way in which you use language to tell your story.